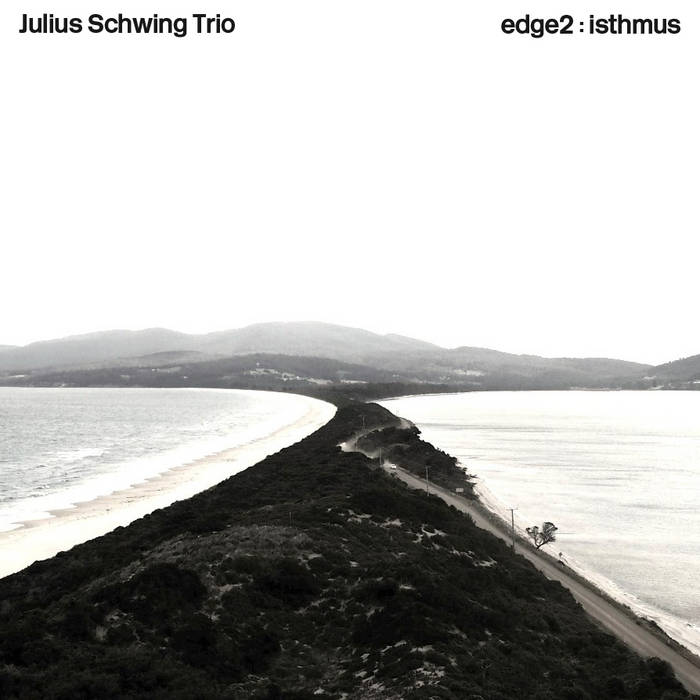 This album is the second release by Julius Schwing and the first released by the new Isthmus Music label, based on Bruny Island in Tasmania ( see: www.isthmus-music.com ).

The album was developed as part of the EDGE2 Isthmus collaborative project with 2D and 3D artists for the MONA FOMA festival in January 2016 ( see: www.brunyislandedge.com and www.mofo.net.au ). The work is inspired by the isthmus that links the North and South Bruny Islands - know locally as 'The Neck'.

From Above.
The soundtrack to an imaginary aerial view of the neck. A song of arrival and an anthem for the scale of this mighty landmark.

The Isthmus Exists.
A more intimate meditation on the sheer fact that the Neck exists, and will continue doing so.

From Within the Car of a Comfortable Tourist.
The title says it all. Dainty and pucker driving along semi oblivious to the multi layered cycles that form and maintain the isthmus.

Neck Nocturnal.
Night time at the Neck. Inspired by Ornette Coleman's "lonely Woman", this short piece is based on the dark hours and in particular the ocean (eastern) side of the isthmus. I feel like the Neck sleeps during the day and comes to life at night.

They're Gonna Seal the Road.
This is an agonized lament for the gravel road. There are three sections, before (pretty) during (grinding and tortured) and after (prettiness destroyed).

Nocturnal at the Neck.
The Neck Nocturnal melody played and recorded in its barest and most pure form in the coastal wattle at the Neck. Nature plays along and provides a neat little wind-crescendo at the end of the song.

Quarternary Rage.
The sand gets pushed around by all the elements. What would it sound like to be within the Neck during a storm?

All songs recorded at the Avalon Futurium on 29/11/2015, except track 7, recorded on 02/12/2015 at the Neck, Bruny Island.
Engineered by Al Future
Mixed by Al Future and Julius Schwing
Mastered by Myles Mumford
Produced by Julius Schwing and Al Future with extra ears Alf Jackson
Original Art by Caroline Rannersberger
Photos by Richard Bennett
Design and website by Mathew Fagan

Bandcamp Daily  your guide to the world of Bandcamp

Featuring appearances from Kari Faux, Bluestaeb and and interview with NY-bred artist Wiki